All Judoon word syllables start with a consonant.
Example: start with an "L", add the "O", result is "LO", but there is a problem with vowels...

TARDIS would incorrectly equal TO AO RO DO IO SO

So the Judoon replace the vowels with the consonant that is closest to the vowel in the alphabet and then add a "C", "L" or an "R" etc. to it to make it a double.
For instance our vowels... A E I O U, become... BLO FLO KRO PLO TRO ...in Judoon

The vowel "I" doesn't have a usable consonant right next to it, H or J would be the only choices and they won't work so "K" is used instead.
(HLO, JLO, HRO, JCO, etc. nothing works... unpronounceable)

TARDIS     correctly translates as... TO BLO RO DO KRO SO

So the general rule of thumb is: Any Judoon double consonant is actually the alphabet vowel that is closest to it, except...

KO is of course "K" and it is fine to use KO when writing because you can see that it is a "K" but when speaking Judoon you must use KNO for "K" to distinguish it between "C" for CO.
The "K" in KNO is not silent, so you will know it is a "K" when you hear it.

QWO ... Q has a "W" added to it making it QWO, it still means Q, it's just easier to read that way. It sounds just like the beginning of "quote" but in case you haven't noticed the Judoon do not use the letter "U" in their words so "quo" is out of the question.

Other Double Consonants and MA

SHO ...is used for spaces between words (SHO is completely optional, some Judoon use SHO some don't. But it does help a lot when speaking Judoon (you will know where the words end)).
So, if you want to use SHO in your translations just check the "sho" checkbox.
In case you haven't figured it out already... the 'OE' letter Œ is being used as the space between words on the printable program instead of the dot or 'SHO' on the regular programs.
So, if you are reading Judoon out loud the 'OE' (or dot.) will be pronounced 'SHO' and that of course means 'space'

SCO ...is an Exclamation! Sometimes used before the word... like !Halt !Run

SPO ...is a question (mark in writing)? SCO SPO literally translates as "Are you excited?"

BLA ...means STOP or "end of sentence" verbally and is used as a period (.) in writing.

CHO ... is used for "quotes" or apostrophes'

PRA and PLA ... are used for (parenthesis)

NOTE: "MA" is also acceptable as the vowel A, translate using MA as "A" by checking the "MA" checkbox. [At the Shadow Proclamation]

JUDOON: sco bo tro no flo jo ko fo to do
THE DOCTOR: no bo ho sho ko ro to so
THE DOCTOR: bokodozogobofopojo
(The Judoon lower their guns)
THE DOCTOR: ma ho
.
.

.
.
Bring the Translator Down to here

Judoon Platoon upon the Moon 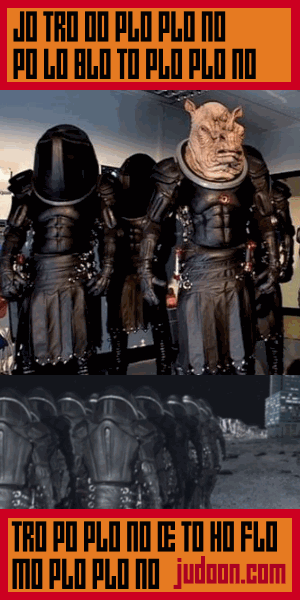